McD is in the hizzouse!

After talking with J at length about our love for beer, video games, and general tomfoolery I am excited to contribute to the HopToNoGood blog as a freelance observer of all things serious and silly in my journey through life. I will mostly be posting about the aforementioned musings I encounter, but I will also post fictional and non-fictional pieces as well as I explore my own craft of writing. Some things you should know about me: 1. I love all things beer. Except sours. Fuck sours. 2. I love music. 3. I am passionate about my family, my sports teams (Colts, Liverpool, Avalanche), and my video games.

I will keep this posting short, but I cannot wait to contribute more as I continue my journey. I am currently in the middle of one of (I would say favorite, but that wouldn't be completely true) my favorite fantasy series The Dark Tower (second read through) so I may write some related things on here. Thankee-sai, (related)

Iiii waaaant to know, do these words, mean anythiiiiing?

You will like if:
You like solid, simple beers.
You enjoy your beer listening to punk and 90's rock.
You can find their taproom because holy cow it's in the middle of a bunch of warehouses.

You will not like if:
You think craft beer is an indie party.
You think punk rock started in 2000.
You expect fruit/sour/funky/craziness in all of your beers.

I'm....I'm just so sorry. Pennywise, you may be replaced for my all time favorite live punk show. Don't get me wrong, Full Circle by Pennywise literally changed the way I think about music, and will forever hold the top spot in my music catalog. But after this show, Face to Face just absolutely crushed any and all of my expectations of how a live punk show should be.

So in May, Face to Face came to town for three straight nights. 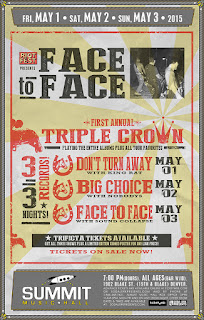 They played their first three albums, in their entirety, plus an encore, three times in a row. And I don't know exactly how to describe it. Whereas most of my 90's punk is all about revolution and fighting the power and uniting for the greater good, Face to Face just instantly puts me in a good mood.

Just writing about it makes me happier. And you know how you can tell when a band is having fun on stage? Like you can just feel when a band doesn't want to be there (In Flames and Trivium, I'm looking at you). There was a warmth and overall happy wave that just washed through the music hall, all mixed in a tornado of a pit.

The band has broken up, played a farewell tour, reunited, swapped members, and quit music "for good, no really this time." But they always come back with their optimistically furious brand of punk. I have vivid memories of playing Face to Face CDs that I burned from my buddy while crushing it at skateboarding. And by skateboarding I mean Tony Hawk's Pro Skater.

Just listen to a few of these tracks and tell me you don't instantly feel better about yourself. And while they were here, they teamed up with the local Big Choice Brewery. As far as I know, the brewery has no official affiliation with the band. But it's clear they are big fans just based off the fact that Big Choice is Face to Face's second album title. At any rate, the brewery offered a bus ride down from their taproom to the show, riding with members of the band plus beer. And I regret not purchasing that offer. How often will that chance come up in my lifetime? That was probably my one shot to drink with some of my childhood (and current) music heroes.

Also they brew the Disconnected Red, an homage to the band's most prolific (and one of my favorites of all time) songs.
Malty, hoppy, and red. Big Choice doesn't go crazy with their recipes. But all of them were solid. Next to my red, you'll see the 10,000 Summers Saison. Again, a somewhat basic farmhouse saison but it suddenly stands out with mild peppery and honey flavors. Nothing crazy, just solid beers that we enjoyed in the summer heat.

The speakers were pumping out Face to Face, Rage Against the Machine, and an assortment of other punk and ska bands. Which instantly added bonus points to my experience. The taproom was small but efficient, and was comfortable.
Add a friendly bartender and local regulars that were eager to talk up the place, and it amounted to a great experience.

(It wouldn't be Face to Face without ending with Disconnected.)