1 Vanilla Bean
8 oz. Chopped Almonds
Soaked in rum (because I'm a pirate) and added in secondary

What a crazy early season, eh? I began the start of hockey season by watching my favorite sports movie of all time, Goon.


Ignore the terrible trailer. This movie is excellent. I liked it so much I ordered and proudly wear a Ross "The Boss" Rhea jersey from a shady online store who turned out to be a super friendly Filipino man who told me my purchase would help provide his family with clean drinking water. Sooooo I'm pretty much saving the world here guys.

The boys in burgundy opened with the offensive juggernaut Dallas Stars who were the highest scoring team last year. I came ready to get rowdy and left surprisingly positive.


It was an absolute artillery slugfest. If Dallas had a decent goalie I would put money on them winning the Cup. Fortunately for us, they have Niemi and Lehtonen. Who are both decent goalies, but decent goalies don't win championships (unless you are Chicago or Detroit, who won multiple cups in spite of their goaltenders.)

The good guys finished an absolutely brutal road trip by swinging through Pittsburgh, Washington, Tampa Bay and Florida, who are all basically guaranteed to make the playoffs this year. And you know what? It actually wasn't bad. Washington made us look like a 10 and under team, but they are my Stanley Cup favorites this year and are playing pissed off at an early exit from last season. That score could have been much worse.

The bottom line is the optimism is there. There are flashes of Bednar's new system in every game; pucks are skated out of the defensive zone almost immediately with a short nouthbound pass or a quick bounce off the boards to get it to the neutral zone. No more absurd two-zone rockets that get intercepted.

And even though we lost by a goal to Winnipeg, I again saw flashes of potential. The 1st period looked like the good ol' boys, lost in their own zone chasing the puck down and getting pushed out of the attacking zone after a single shot. But in the 3rd period Colorado shot 20 times (!), which is more than the good ol' boys used to shoot in the entire game. And as soon as I figure out how to make gifs out of videos, I'll throw up some highlights and go in greater detail.

So, let's recap with some Good Things and Bad Things:

Good Things
-More shots
-MacKinnon and Landeskog are playing like manimals
-Rantanen is back in the lineup, and playing in the top 6
-Zadorov is looking great
-Martinsen is hitting everything in sight and is great on the forecheck
-The Power Play is approximately a billion times better than last year
-Bednar's new defensive system is starting to show, which is good for Varly. Varly is a reactive goalie and likes to see the shots so he can react (and he can flash the pad in like a quarter second.) He's not like a say....Belfour or Brodeur who are able to set up perfectly angled without seeing the puck
-The defense is also more aggressive with the puck attack and getting their sticks in the passing lanes

Bad Things
-Duchene is playing his game only every so often. He needs to play his elite game every time. He's capable of taking over the game single-handedly when he's on
-Defense is falling back on old habits and collapsing in the defensive zone
-5 on 5 Colorado is still having trouble maintaining the zone and are falling back to being one and done
-Iginla, man, I love ya but you don't belong anywhere near the top 6. The play dies every time you touch the puck. I'd like to see him on the 3rd line and power play duty

So hey, it's early. I said before that it will be a long season. A deep strategic system like Bednar's takes time to implement, especially after about a decade of a nothingburger system with an extra side of nothingsauce. 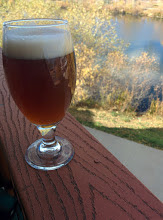 This is my carrot cake brown ale. Back when I first started brewing, the pumpkin beer craze was in full swing and has only gotten worse (or better, depending on how much you like pumpkin beer.) Personally I like fall for the pumpkin beers if only because it is so saturated it forces breweries to try new things.

In an effort to be a unique snowflake I chose to brew my own take on the fall spice craze and threw together a carrot cake recipe. The first 4 years were....not great. They ranged from offensively malty to hilariously overspiced to just plain mediocre and forgettable, which I think is one of the greatest insults to a beer.

It's fall, it's window opening and patio drinkin' weather, hockey is back. What a great time of year. I'll pair it with a great spiced beer.


Just like last year, there were far too many beers for me to keep track of, so I'll give a rundown on what drunk J managed to snap a picture of.

I have a major fascination with the design of beer labels. In another life I'm a successful beer graphic designer, probably living in one of those tiny houses or vans converted into an apartment that seem to be all the rage nowadays.

So that being said, I did my best to capture some of the cooler labels and designs. Let's start local with Mockery Brewing. 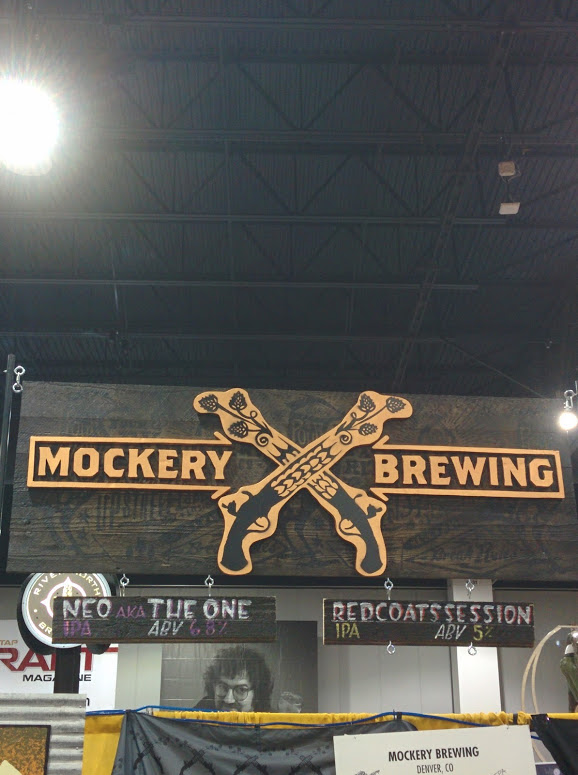 I'm a sucker for flintlock pistols, what with my pirate obsession and all. And you add hops and barley in the mix? I'm yours. I tried their Redcoat Session IPA, because it was 5% and I needed to pace myself. I love me a good session IPA, and this was no different.

Next up was Lakefront, with their Brandy Barrel Imperial Pumpkin. 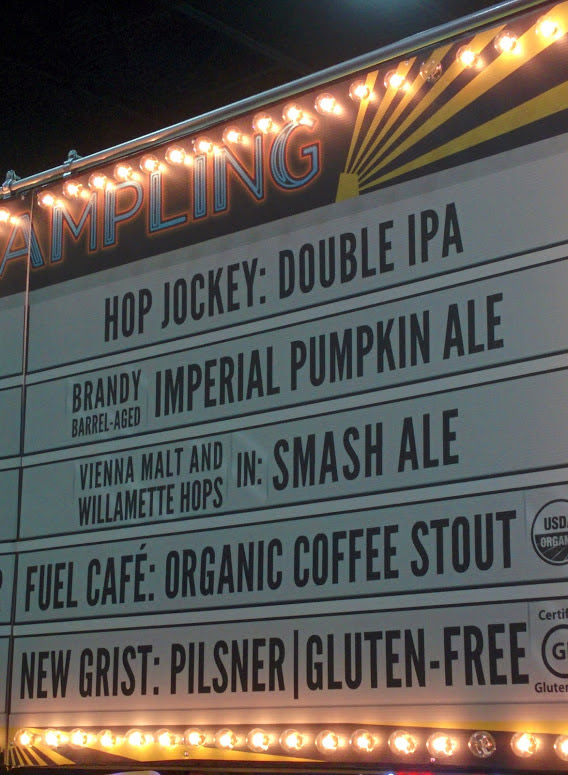 Now, I know pumpkin is played out, but bear with me. Every year in September, breweries big and small start rolling out their pumpkin selection (too early!) with great fanfare. And then there's Lakefront. They just sort of appear on the shelves one day with no huge marquis or sign. And I'm telling you it's the best pumpkin beer on the market. It's spicy and malty and just....well it's just the best. And the Imperial version is the

Tin Man Brewing from Indiana, you're up next. 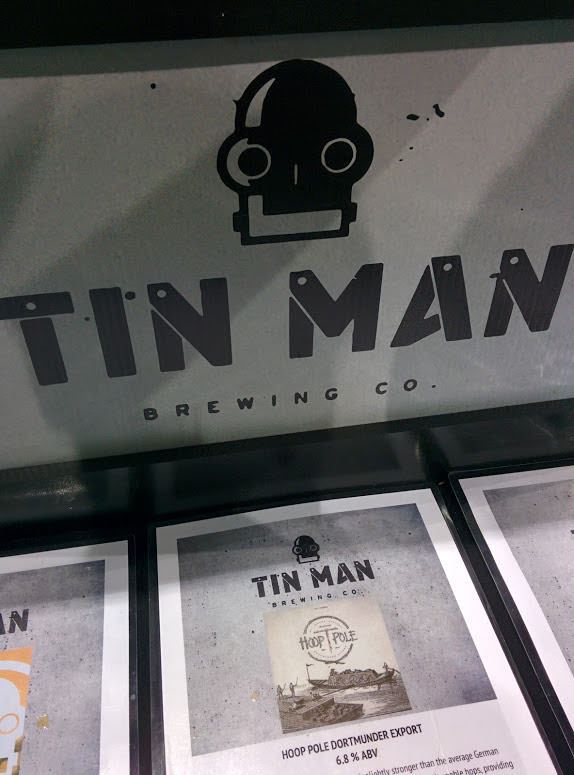 So anybody that knows me knows that I am terrified of the impending AI revolution, and subsequent robot wars. But I love me some robots in media. I loved watching giant robots punch giant aliens in Pacific Rim, I love shooting giant robots in MechWarrior Online, and I love watching Achilles fight Russia for the Alaska Territory in Robot Jox. As a result, I'm loving this label. It's simple, it's industrial, and it tells me their story. Seriously check out their website. I want a full poster of their Overlord.

I wanted to include MacLeod Brewing from California 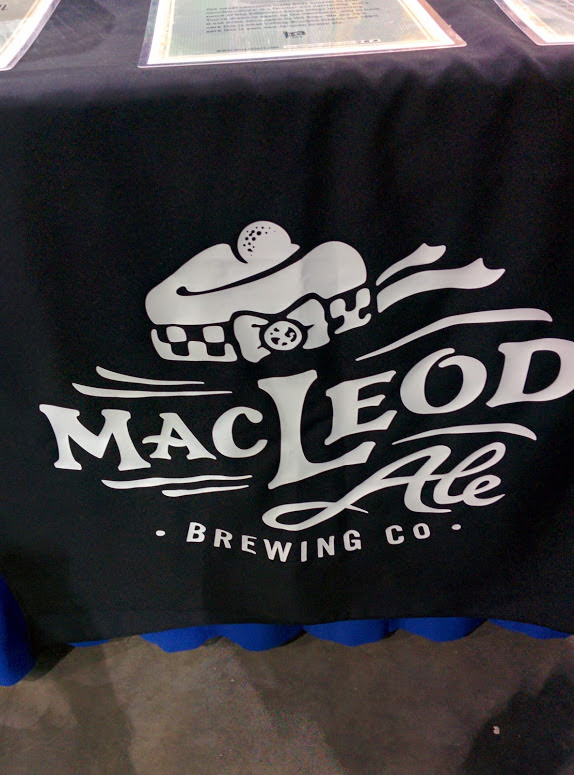 because of one of my favorite Avs players, Cody McLeod. 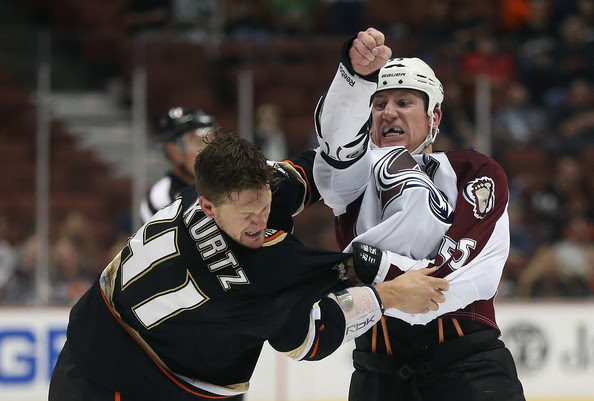 Plus I told the rep I liked the name and he said I was the first person all day to pronounce it correctly. Sooooo we're pretty much best friends now.

I had to include my favorite hometown heroes, Great Divide. 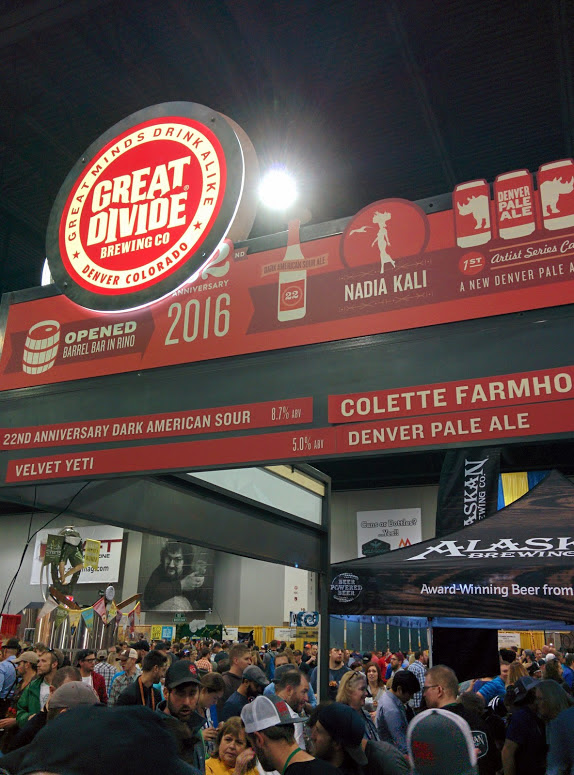 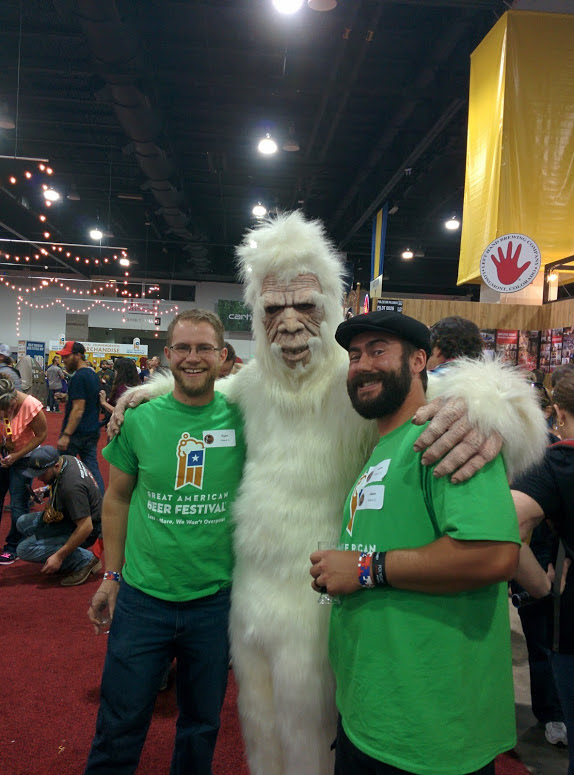 With Yeti picture. I'm pretty sure we cut in line for that photo because some ladies yelled at us. Sorry ladies! I genuinely didn't know there was a line.

I tried their new Velvet Yeti, which is my favorite beer, Yeti, on nitro. And oh man. Just, oh man. Perfect.

Flix Brewhouse has these awesome movie-themed posters and beers: 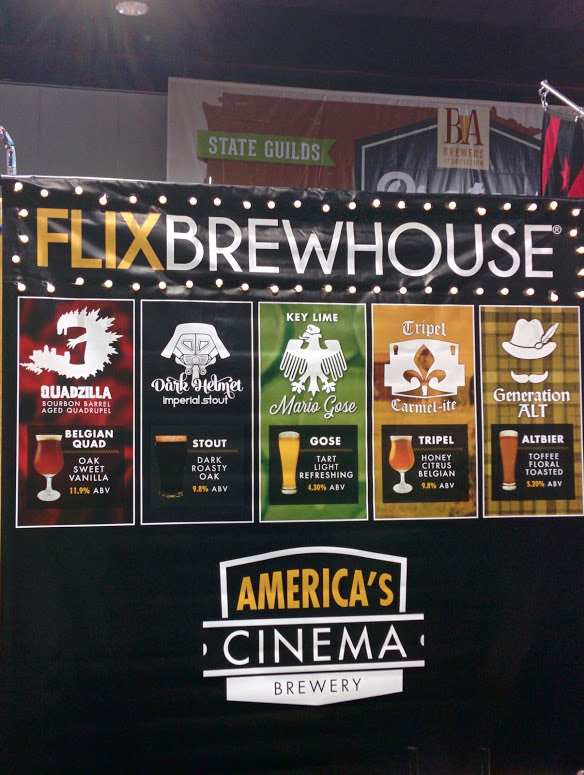 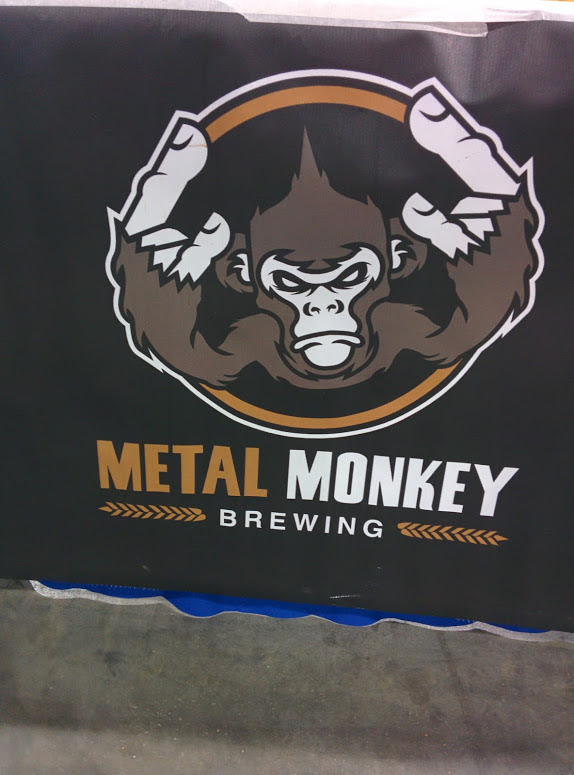 Florida-based Barrel of Monks was kind enough to pose for a wicked pic: 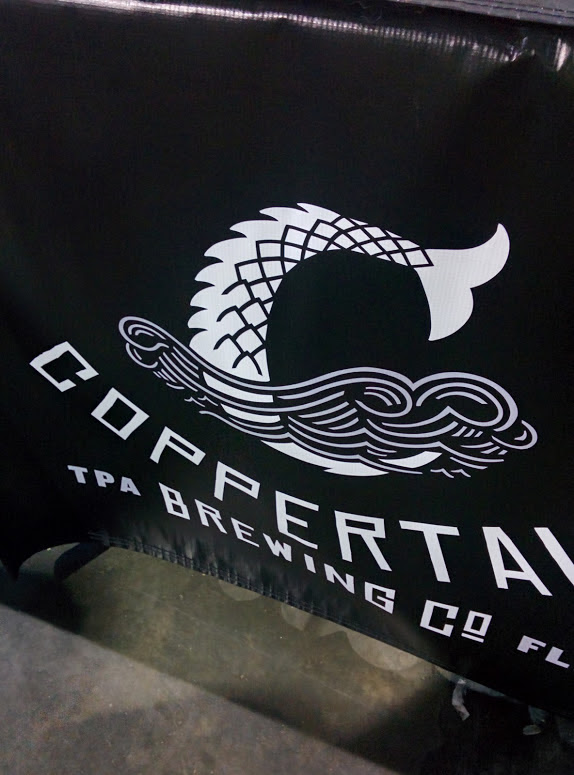 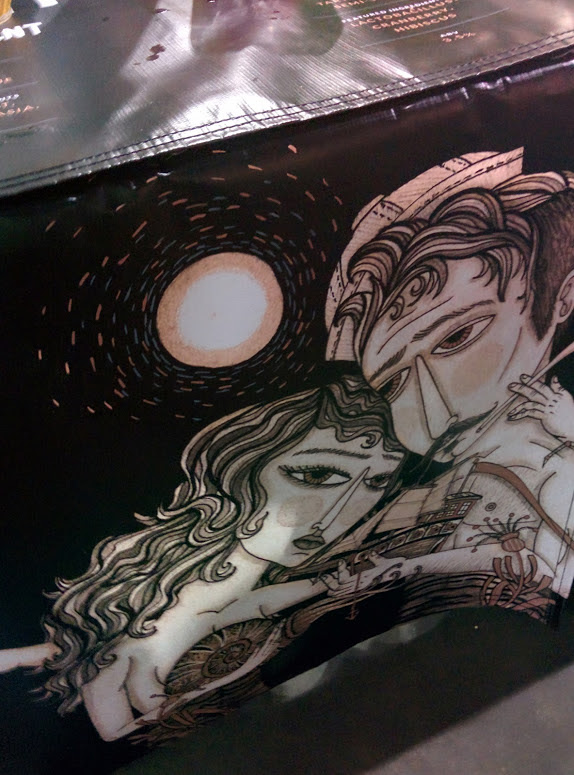 Seriously click the link. The whole thing is like that music video for Tonight by Smashing Pumpkins.

Had to get a picture with the Modus Mandarina can naturally:

To wrap up, I ask a question. Do you remember the 90's pop band Hanson? Yeah, those guys. I know you know it.

Seriously, check this out: 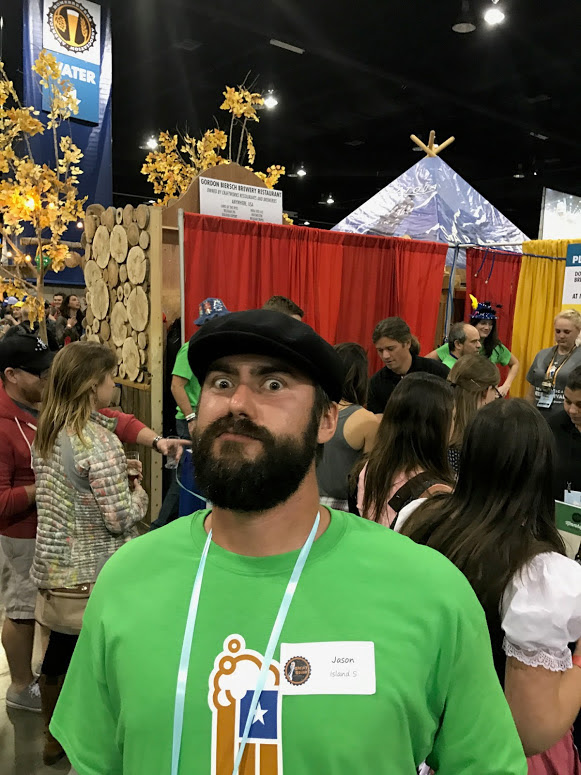 Can you guess the name of their beer? I bet you can. Go on, take a guess. Did you guess this? 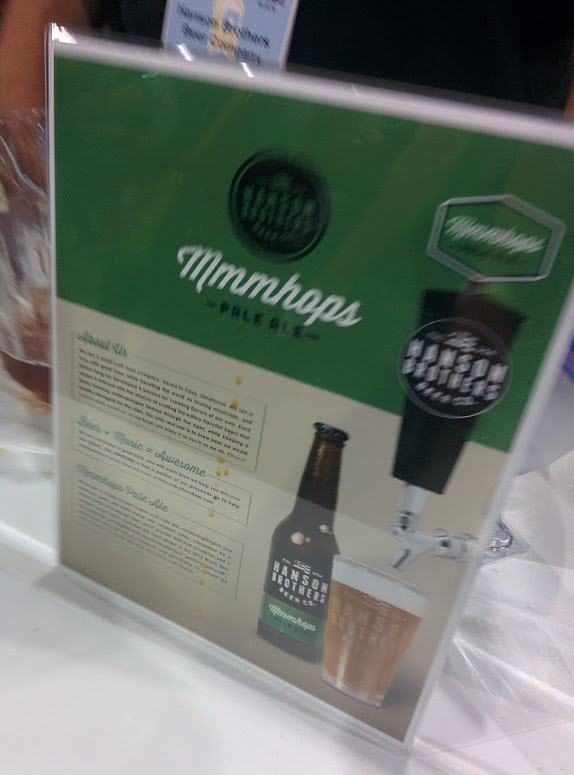 Blurry picture aside, it's called Mmmhops can you even believe it? Amazing.

So I saved these two for last, because they were far and away the best beers I tried. Where do I even beg...wait, no. I'm just so excited. Okay, deep breath.

Let's start with Mantra from Tennessee.


You see that beer listed as Goo Goo Gish? It's apparently based on a cookie, and I can't even describe how it tastes, but I'll try. It tastes like a chocolate cookie with caramel and toffee crumbles. That's it, that's the beer. I don't know how they do it. But there it is. If it ever emerges in the Denver market, I'm not joking when I say I'm going to buy up every bottle I see, if only to share it with the world.

I'm getting jealous just writing about it, so let's continue on to Insight Brewing from Minneapolis. 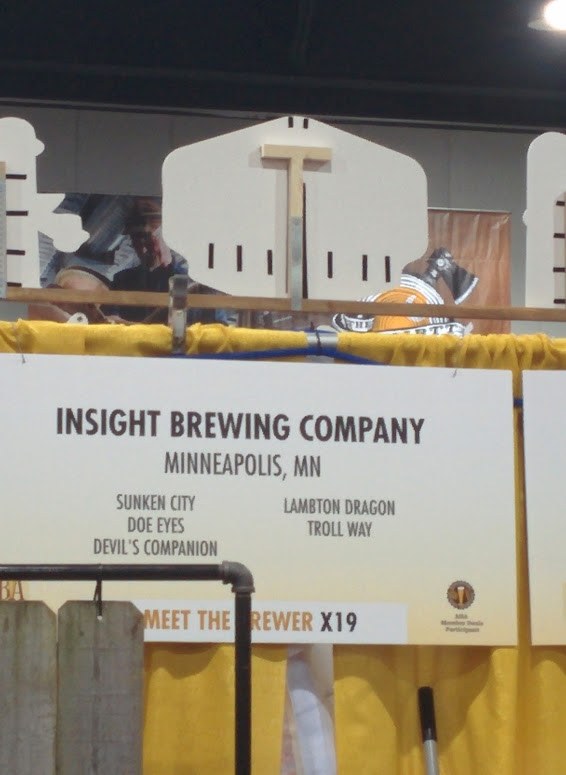 The Wild hockey club has made left me predisposed to hate everything from Minnesota, but I girded my loins and tried these guys because their setup was wicked:

And oh my goodness, look at these labels: 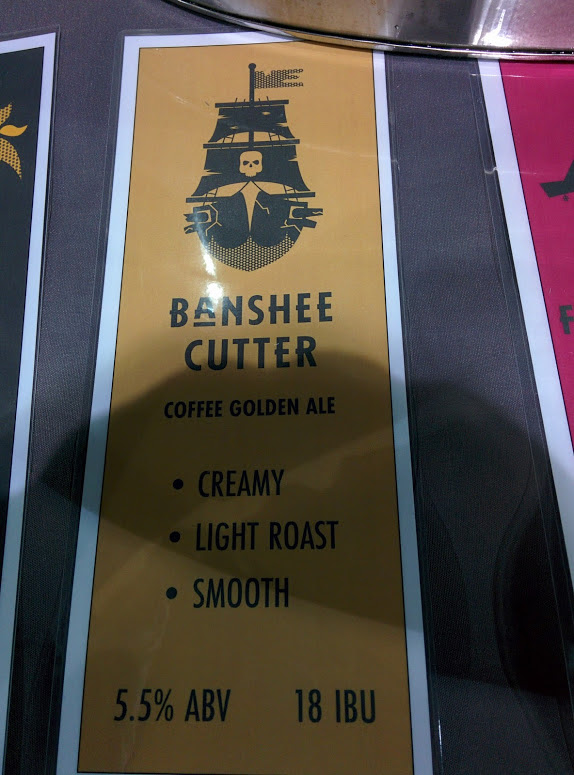 Their whole website is this crazy troll/pirate/viking/mythology theme. It's just perfect, and the beer was a crazy surprise because I'd never heard of them before. Absolutely delicious.

Until next time GABF, it's been weird.
Posted by J at 5:36 PM No comments: