Drinking eternal on the Fury Road to Valhalla

You will like if:
You like being able to chew your beer.
You judge IBUs based on how far away you can smell hops.
You think Imperial IPAs are perfect. Perfect in every way.

You will not like if:
You think hopsplosions are MEDIOCRE.
You prefer your beer so clear you can see through it.
You can't handle driving a War Rig.


Pack if up friends. Mad Max: Fury Road is the greatest movie ever made. Sorry, that's it. It's all downhill from here. But wait! you say. I really prefer the nuanced performance of-

No, you are wrong. Nothing will convince me that there exists a movie better than Fury Road. Even the trailer is amazing:

Bam! I got furious goosebumps just watching that trailer again. If you don't think that's the most insane trailer you've ever seen, get out of my face.

Every scene is perfectly crafted. No wasted space, no wasted time. There are details in every shot that you won't catch the first or even second time viewing. Why? Because you'll be giggling like a small child at the awesome spectacle on the screen.

I literally stood up and cheered at the conclusion. I've never done that before.

Things that were awesome beyond comprehension:
-Charlize Theron plays a character named Imperator Furiosa
-They actually built all of the cars and machines, got them working, and then blew them up
-The movie crafted a believable setting without telling you anything. Everything is explained with hardly a word
-EXPLOSIONS
-Again her name is Imperator Furiosa

I'm going to stop talking about the movie, because I'm getting all worked up again just thinking about it. I can tell you I have renamed my 68 Chevelle "Furiosa" and have been driving it aggressively over the past few days with the Fury Road Extended Soundtrack blasting at full volume.

I actually spent a good, long while at the beer store trying to find a suitable beer to fully capture the essence of the movie. Should I go with a punch-full of hops? A furious alcohol content? An explosion of sour flavor? A blast of nose-wrinkling smoke?

And then there it was. It was so simple, so obvious. 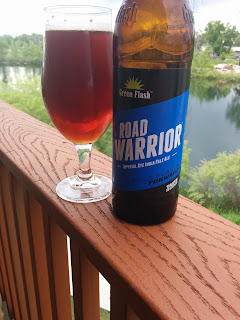 The Road Warrior, by Green Flash. An Imperial Rye IPA, clocking in at a hearty 80 IBUs and a respectable 9% abv. The label is basic, uncluttered. Clean like a shiny and chrome V8.

I now realize I should have taken the picture on my Chevelle to really keep with the muscle-car vibe. But let's move past that.

Look at that color. Beautiful red, hazy, thick. It hit me in the nose first. Sweet, with a sudden kick of spicy hops. I could smell the bitterness.

Despite being a higher alcohol beer, there was no alcohol burn. Which was dangerous, because I love Imperial IPAs, and this was no exception.

You could pretty much eat it. I'd imagine it would satisfy a lone road warrior, out hunting for guzzoline. Green Flash hit the spot again, and I can heartily recommend this one.

I leave you listening to Brothers in Arms:

And may you drink forever on the Fury Road, shiny and chrome.